Pøbel is a band that plays captivating and danceable medieval music performed on a multitude of instruments such as the hurdy-gurdy, vielle, bagpipes, lute, shawm and various medieval drums. Bringing authentic instruments, tunes and costumes on to the stage Pøbel

late 1400s - it is also one of most busy and ambitious medieval bands in Denmark today!

”Pøbel” is an old Scandinavian word for ”mob” or ”crowd” and as the name suggests, we like to focus on the music of the common man i.e. the music that ordinary people could have experienced at the faire or at other festive occasions around medieval Europe.

The involved musicians are all very active in the contemporary Scandinavian folk music scene and with Pøbel we like to take the medieval troubadour songs, hymns and anthems and transform them into instrumental dance music based on the idea that art music has influenced folk music anywhere throughout history. The result is a kind of ”medieval folk music” which seems both authentic and timeless. It's basically early music for modern ears!

Despite some changes in the line-up along the way, Pøbel has many years of experience playing at various events and locations. 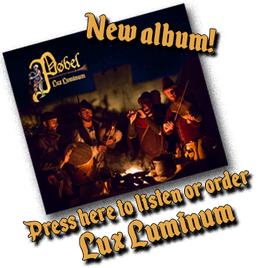